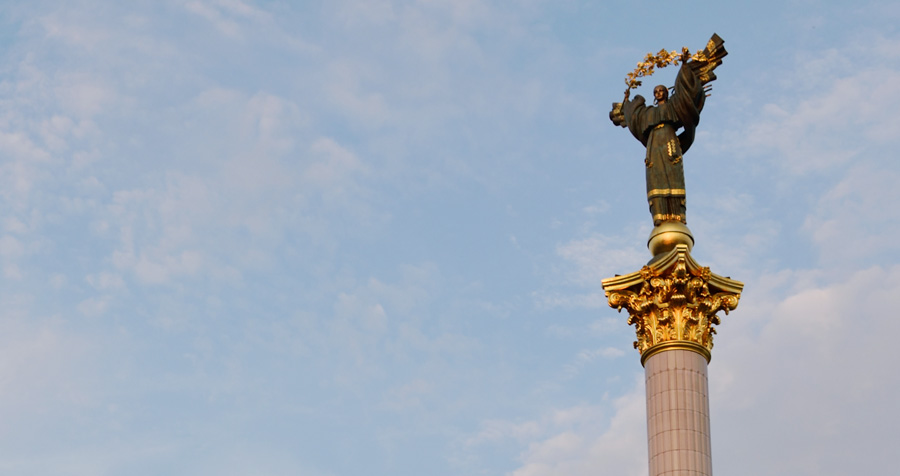 "The glory and the freedom of Ukraine has not yet died" is the national anthem of Ukraine. The anthem's music was officially adopted by Ukraine's Verkhovna Rada on January 15, 1992. The official lyrics were adopted on March 6, 2003 by the Law on the Anthem of Ukraine.


Before, the song was the national anthem of the Ukrainian Republic, of West Ukraine, and of Carpatho-Ukraine. Following its secession from the Soviet Union, the song was once again adopted by independent Ukraine. Before its re-adaptation, a competition for a national anthem among three patriotic songs took place. One of the other songs was 'For Ukraine' ('Za Ukrainu') by Mykola Voronyi.

The lyrics constitute a slightly modified first verse of the patriotic poem written by Pavlo Chubynsky in 1862. Chubynsky was a prominent ethnographer from the region of Kyïv. In 1863, the composer and Greek-Catholic priest from the west of Ukraine, Mikhail Verbytsky, composed the music for Chubynsky's text. The first choral performance of the piece was at the Ukraine Theatre in Lviv in 1864.

Lyrics of the anthem

Ukraine's glory has not yet died, nor her freedom,
Upon us, compatriots, fate shall smile once more.
Our enemies will vanish, like dew in the morning sun,
And we too shall rule, brothers, in a free land of our own.
Refrain ×2
Souls and bodies we'll lay down, all for our freedom,
And we will show that we, brothers, are of the Cossack nation!

History of the anthem

The Ukrainian national anthem was born in the autumn of 1862, during one of Pavlo Chubynsky's parties. Chubynsky heard Serbian students (who were studying at the Kyïv University) singing a patriotic song, mentioning the Serbian Tsar Dushan and including the line "Srste biye i krv liye za svoyi slobodi" as a refrain. He liked that song and upon hearing it he went quietly into another room and half an hour later, he came out with the complete lyrics for the song "Shche ne vmerla Ukrayina". And he promptly sang it to the music of that Serbian song. 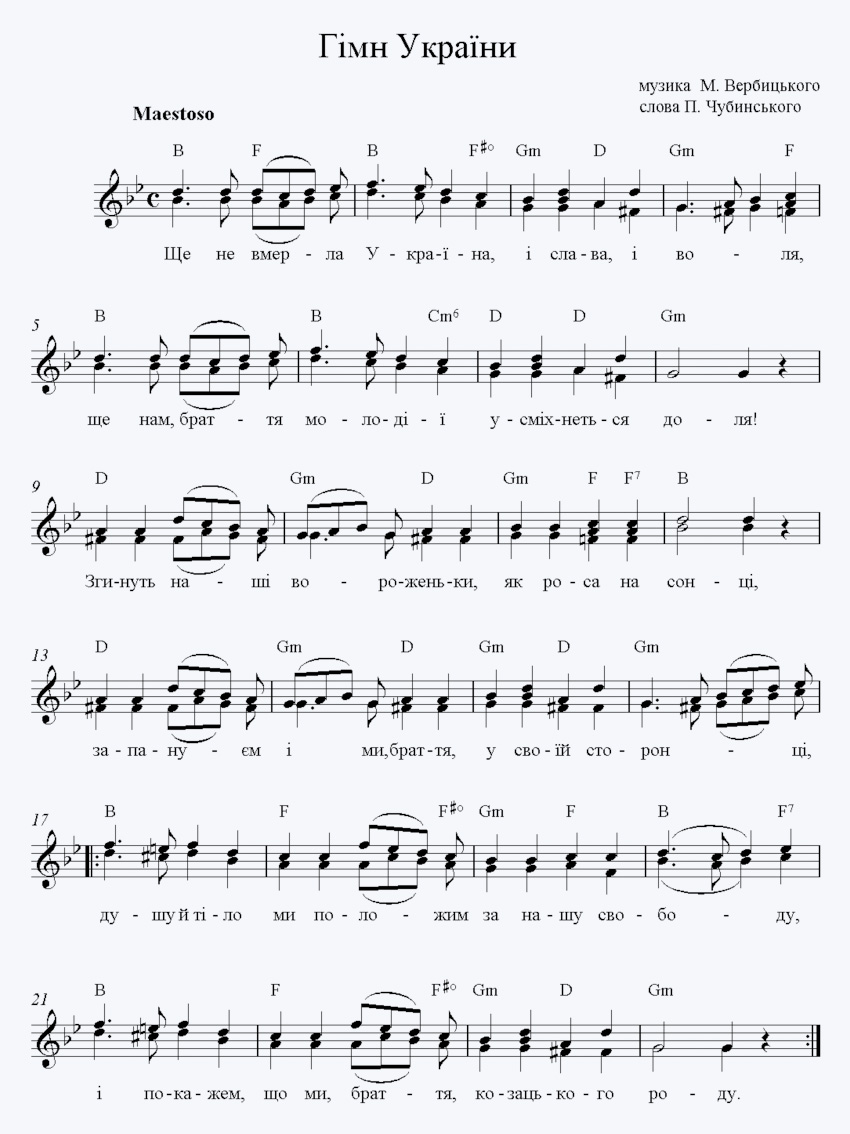 Some researches believe that the Polish national song "Poland Is Not Yet Lost" (Polish: Jeszcze Polska nie zginęła), that became Poland's national anthem, also had an influence on Chubynsky's lyrics.

Chubynsky's poem was officially published in 1863 for the first time, when it appeared in the fourth issue of Lviv's journal Meta. Soon after, the poem became very popular in the west of Ukraine. Inspired by the poem, Fr. Mykhailo Verbytsky of the Ukrainian Greek-Catholic Church, a prominent Ukrainian composer of his times, decided to put the words to music. In 1865, Chubynsky's poem was published with Verbytsky's sheet music for the first time. The first choral performance was done at the Ukraine Theatre in Lviv in 1864.

When Ukraine was annexed by the Soviet Union in 1920 and the Ukrainian Soviet Socialist Republic was formed, the anthem was immediately banned by the Soviet regime. At the dawn of the Soviet Union, when it was decided that each Soviet republic could have its own anthem, the poem "Shche ne vmerla Ukrayina" was rejected in order to suppress separatism amongst Ukrainians. Soviet rulers wanted a text that would state that Ukraine is a country inside the USSR which is "equal among equals, free among the free" and it necessarily had to mention the communist party, that lead Ukraine towards communism.
This was done by Pavlo Tychyna, whose version of "Zhyvy, Ukrayino, prekrasna i sylvan" was the official anthem of the Ukrainian SSR from 1949 to 1991. Composer Anton Lebedynez' wrote the music. This anthem never became popular among Ukrainians, and in Soviet times the USSR's anthem was played during nearly all official events in Ukraine.

On January 15, 1992, the music for the State Anthem of Ukraine was adopted by the Verkhovna Rada (parliament), and was later instituted in the Ukrainian constitution. However, the lyrics for the anthem were not officially adopted until the 6th of March in 2003, when the Verkhovna Rada passed a law, proposed by president Leonid Kuchma, on the national anthem of Ukraine. The law proposed Mykhailo Verbytsky's music and Pavlo Chubynsky's first verse and refrain of his poem "Shche ne vmerla Ukrayina". However, the first line was to be changed from "Shche ne vmerla Ukrayina, ni slava ni volia" to "Shche ne vmerla Ukrayiny, i slava i voila."

The popularity of the anthem has become particularly high, in the wake of the Orange Revolution protests (2004) and Euromaidan (2013). Ukrainian composer Valentyn Sylvestrov, who participated in the protests in Kiev, characterised the Ukrainian anthem as:

"The Ukrainian anthem is amazing. At first it doesn't impress you at all, but that's only at first glance. Indeed, this anthem was created by Mykhailo Verbytsky, clerical composer of the mid-19th century. He lived under the Austrian monarchy, probably was fond of Schubert; he had an euphonic gift - it's clear from his liturgical compositions. He was a church composer. And this patriotic song, he created as a church composer. This chant is a Halleluiah. No other anthem has this! It's a unique piece: the anthem of Ukraine, which at the same time has all characteristic features of a liturgy's beginning. Some memory of a liturgy, of an all-night vigil, has drowned in this anthem. It seems as if wind blows in this simple chant, as if tree branches are singing."